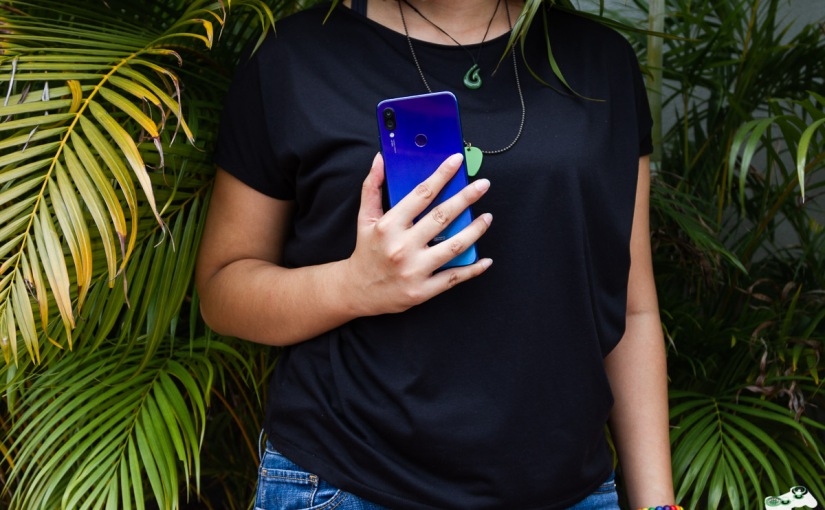 With the way things are going at the moment, I’m sensing another Redmi launch coming soon so while we wait for an announcement to come around. So, sit around the virtual campfire while I tell you about the latest in their Note series…

Redmi is Xiaomi‘s budget line of smartphones, build absolutely with consumers in mind. If you go around any Asian country, you’re sure to find a number of uncles or aunties with a handful of phones, playing Pokémon GO. What better way to stock up on spare accounts for raid-assists then to get a reliable budget phone?

A lot of phone brands coming out of China have introduced a new kind of phone design that plays a lot with colour and I have to say that I’m a big fan of that. The Note 7 that I’ve got here is has a shiny blue-purple ombré look that’s subtle yet really pretty. Too bad I can’t seem to capture how pretty it is in a photo.

Xiaomi doesn’t like to follow trends where other brands have gone for a full-screen display with a hidden front-camera, (there have been a few more Redmi releases since this one in January of this year) the front of the Note 7 still has a little notch for the front camera and still has a little bezel at the bottom. Although to be honest, that doesn’t bother me in the slightest.

I’m an old-school kinda gal. I like my phone to have buttons and no mechanical bits and bobs, thank you 😉

Don’t let its size deceive you though… This phone is a lot lighter than I expected yet feels surprisingly sturdy for a phone with a plastic casing.

Still doesn’t prevent me from freaking out a little though.

I’m surprised its not actually a “note” in the sense that you would think of, I’ll get to that in a second. Its big, yes, but that’s all that phones are nowadays. The Note 7 is a bit lighter than my iPhone 6S tho it weighs about the same as my boyfriend’s Huawei Mate10. I can see a draw to it – a light yet still seemingly powerful phone at a lower price…

That being said: there’s no “note” capabilities like you’d imagine. The phone comes as is – there’s no stylus and thus it doesn’t give me the doodling capability that I’ve come to enjoy from a certain Note series. Sorry but f I’m told I’m getting a “Note”, I want the ability to draw on it with its stylus. I like doodling!

Anyway, I’m not too sure how I feel about the Note 7’s camera … It looks to take decent enough photos but since its flaunting a 48MP camera, I would have thought it to be more than just decent. The photos are sharp, don’t get me wrong, but the colours are bland and that seems to be the issue I have with phone cameras nowadays. Stay tuned for a piece on that 😉

Despite this slim little device packing the Snapdragon 660 with 6GB RAM, it took less an hour into Pokémon hunting with my friend before I experienced major lags. I had to shut all open apps down and let the Note 7 rest before continuing my hunt. And Pokémon GO isn’t a heavy game to begin with! To make sure this wasn’t a one-time thing, I tried playing a couple of rounds of PUBG and even on the lowest resolution setting I could not enjoy a smooth game.

The Redmi Note 7 isn’t the latest by Xiaomi so there have been a number of technological improvements within their recent releases though the Redmi line is meant to be their budget series. Just keep that in mind.

So with that said, this isn’t something that I would personally go for, it doesn’t seem to do well with playing games and it has a disappointing camera setup – two of the most important aspects I look out for when getting a phone. But it seems sturdy enough to be a backup phone, or your secret phone missus who’ll take all your business calls and messages for you.

The Redmi Note 7 is currently available at MYR659 (non-affiliate link) & doesn’t seem to be available in the US. This review unit was kindly provided by Xiaomi Malaysia.

Feel free to follow me on Twitter and Facebook where I’ll let you know when new posts come up. I also make zero money on this site so if you enjoy my content and would like to support my one-woman show, consider becoming my Patron!